In Behind the Threads, I explore successes and mistakes in cosplay and prop making. 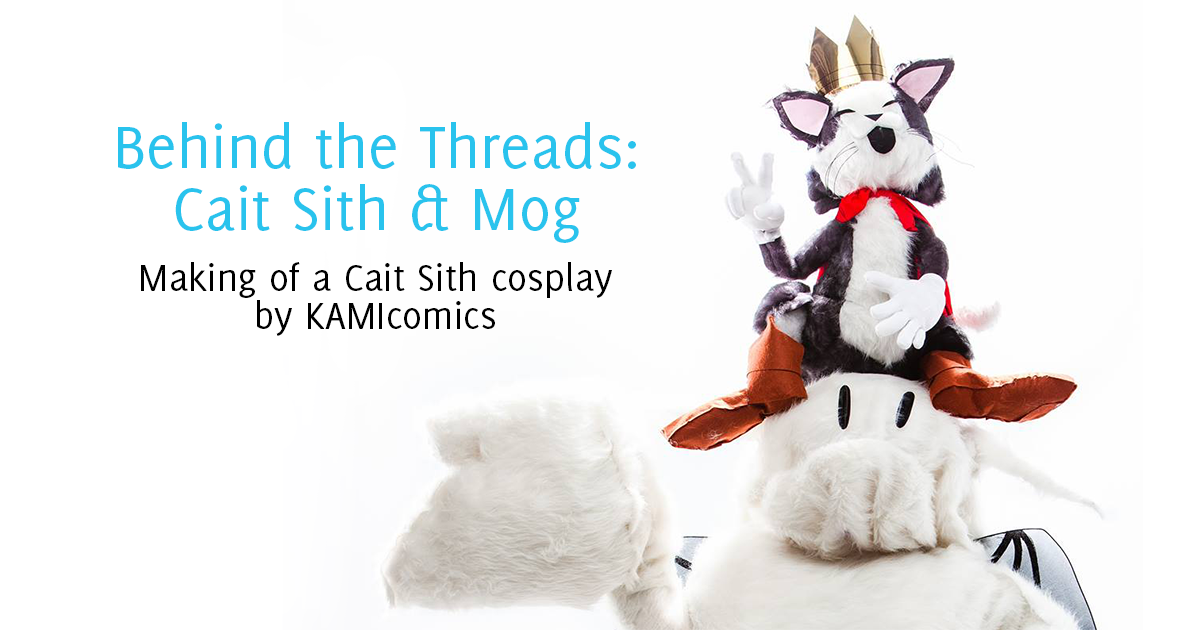 GAAM really loved my Teddie cosplay. They asked be to build a Cait Sith and Mog for their 2015 show.

(Actually they asked for Cait Sith, but I have serious masochistic tendencies, so I decided they NEEDED a mog)

This costume was a huge undertaking I did in the middle of my tiny one bedroom apartment. I like to write a lot about the mistakes I make when I do these things and Cait Sith had soooo many.

My name looks so official :D

I’m INSIDE the mog.

I started with a wire frame, made from armature wire. I wanted Cait Sith to be posable even though no one would be in him. Everything down to his fingers could be manipulated.

Once the frame was built, I got a very large amount of white fur to use to build his body, and the mog.

The fur was made of polyester, and I needed some of it to be black. Polyester hates being dyed, but I read you could do it if you heated the polyester. I only had my little apartment stove, so I would cut the fur roughly into the shape I needed for the body, lightly boil it with the dye, lightly rinse the dye in the kitchen sink, and then comb the fur so it wouldn’t clump up.

One thing I learned was when you cut fur, it’s easiest to flip it upside down and use an exacto blade to cut through the fabric that the fur is attached to. Then pull the fur apart. This made it really easy to hide the seams when I put him together, because the hairs that made up the fur weren’t cut.

I also learned how easy it was to lose a cat.

Once everything was dyed, I glued all his pieces together.

His facial features and the inside of his ears are felt. I purchased white gloves and a red bow tie for those parts. His crown is metallic paper, cut into a crown. His shoes were assembled out of felt and card board.

I used a lot of my Teddie techniques. I built a wearable frame from several hula hoops, covered with a pool noodle. The frame had suspenders, which was how it stayed up.

I made myself a muslin “body suit” that is inside the costume. The wrists, ankles and shoulders are all closed off – the suit is attached to the fur. This was to make it so I could just climb in and out of the costume without the stuffing adjusting too much, or falling out.

Once I had the frame done, I just draped the fur over it and attached the fur to itself. This part was really frustrating because the fur was HEAVY and it kept harming my frame. The fur was also slightly see through, and I ended up wrapping the (hot pink) pool noodle in duct tape and white fabric to strengthen and hide it.

There are long fabric strips that run down the inside of the arms. The strips end about where my wrists are, and I tied toy claw grabbers to the end of the strips. I could hold onto to the claws to manipulate the arms. I had a grand dream of being able to open and close his hands while in the costume, but the claws weren’t big enough to create this effect.

The inside of the arms also have slits where my real hands could come out. I really want to wear mog at a con, so these were all plans to help me eat and drink while in the costume.

The head is my standard “chinchilla ball with a hard hat” set up. The ears are wire coat hangers, poked through the fur and wrapped around the slits in the chinchilla ball. I can’t actually see out of the eyes, because I couldn’t figure it out before the shoot!

His feet are sturdy paper with fur glued to it. His bat wings were purchased online.

My first mistake was skimping on the fur. I wanted to save money and bought all white, polyester fur. I managed to dye Cait Sith black, but if you touch him, the black fubs off onto your fingers. The area where he sits on the mog is black, and his tail looks dirty.

The fur was also stiff and just gross feeling, especially where I dyed it.

My second mistake was stuffing. I bought too little stuffing (again, being cheap) and didn’t compartmentalize the inside of the mog enough. All the stuffing fell towards my feet and the top of the costume looks deflated because of this.

My third mistake was time. I started the project early but didn’t dedicate enough time to it. Also, when I saw the stuffing messing up, I had the brilliant idea to inflate 50 balloons and put them in it. It didn’t work and I spent like 3 days blowing up the balloons.

The night before the shoot I could not get the costume to lay right, the fur wasn’t staying attached, and I was so frustrated. About 3 am I threw up my hands, muttered something about how it would just look bad, and went to bed. Christopher stayed up until 7 am, gluing and sewing and re-gluing the fur on. When I woke up from my fury nap, the costume was 99% done, thanks to his work.

Video of the shoot:

Getting into the costume was another story. We showed up 30 minutes early to the shoot, thinking it was enough time. My eye hooks in the back of the costume wouldn’t attach and Chris ended up sewing me into it, which was a riot because he can’t sew.

It took almost 2 hours to get into the costume, and it was already a billion degrees before we even started to sew up the back. I thought I was going to faint.

You can see how red my face was after the shoot. At one point they stuck a fan so it was blowing up the leg. It was an interesting, hot experience.

Finally, during the shoot, Cait Sith fell off the top! So in the back of a lot of the photos, Chris is crouched, holding Cait Sith up. He’s the real MVP here.

Overall, I enjoyed making the costume. I doubt I’ll ever wear it to a con, but I’m proud and pleased with the results.