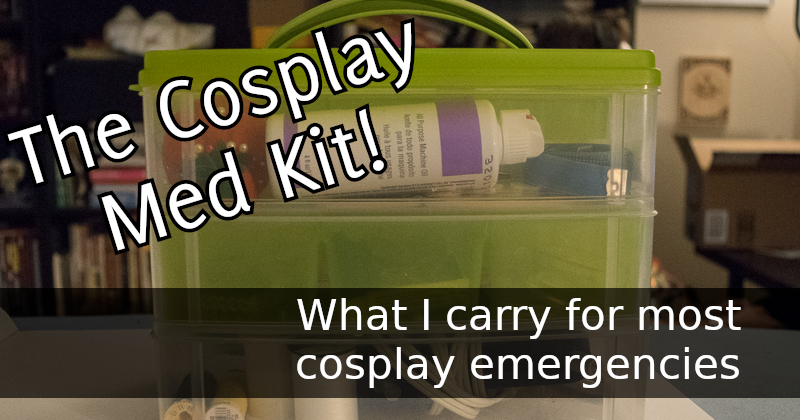 I started writing this before driving 6 hours to shoot Majin Buu for GAAM. It was an important shoot to me, for a group that I love, doing a costume I was very proud of. I was arriving 3 days before the shoot, which was kind of terrifying. 3 days where anything and everything can go wrong with my costume, and I would be too far away from my closet of spare cloth, various glues and all the tools I needed to fix it.

This is a problem I run into at cons all the time. You left a prop in the sun and the glue melted a little and pieces popped off. You snagged a door or tripped and tore a glove. You lost an earring. Someone glomped you (ugh) or grabbed you by your costume or wig and now this cosplay you spent dozens of hours on has a glaring injury!

Actually glomping makes me real grumpy. Click to read
All of these things have happened, but the glomping is the worst. Some people act like it’s cute, quirky or harmless. It’s not. It takes away a person’s agency over their body and their apparel. “Cosplay is not consent” definitely relates to this.

I’ve had people drag me backward by my real, actual hair, which is part of the reason I own 5 blond wigs. I’ve had people tackle me, pin me between their friends or a wall, spill drinks on me, and take or knock props, food, and purchases out of my hands.

Don’t touch people. It’s creepy and freaky when someone runs into you out of nowhere. It hurts when you get body slammed by over 100 lbs of nerd. It leads to you looking over your shoulder all the time because that weird, space-invading person might come back for you.

To keep control of my blood rage, I keep 3 small stacking boxes that hold almost everything I need should my cosplay break or get damaged.

Here’s what’s in the box!

Level 1 is emergency cloth repair. It stores needles, safety pins, some sewing machine gear, a few straight pins, as well as some stick-on Velcro and elastic. I usually keep a detergent pen in here, too. With this I can repair almost anything, from a broken shoe cover to a torn strap.

Level 2 is for emergency prop repair. It holds spare buttons, glue sticks, and a few items that can double for other things. The picture frames in the bottom right make good fake buckles, as seen in my Millia Rage cosplay. The gold trim was used for my John Hancock costume, but could double as gold jewelry, if needed. There’s eyelash glue, which is useful for eyelashes and emergency spirit gum. And eye drops, because I have dry eyes. No shame.

Level  3 holds costume specific things. It changes the most often. I repack it before almost every trip. For most costumes, it holds a pair of tights, scissors, glue gun, a spool of clear thread, and clear nail polish (which is one of the single most useful things you can carry. It stops tears and runs. It makes things shiny. I’ll have to write a whole other post on it).

The green container holds small accessories. For example, for Squirrel Girl it would hold spare acorns, earring hooks, ribbon, and fingernails. In this photo, it’s packed for Majin Buu and holds his mouths. This level also has thread matched to the costume I’m wearing. The clear thread is good, but it’s not as strong as the cloth thread, so if I can bring some along, I will.

So that’s my super cool container! It won’t solve every problem, but it’ll help keep you going through a small (cosplay) emergency.